What is Money Laundering and why we take it so seriously? 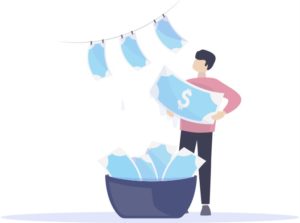 Have you joined the Netflix craze? Then you might be familiar with TV shows like Ozark and Dirty Money.
These series take you on an in-depth journey that paints a picture of money laundering.
So, what is money laundering all about?

Just as art imitates life, real individuals and organized groups use inventive schemes to hide their criminally obtained money. One of the ways they do this is by funneling money into various other streams, so the source of the money is disguised. They may use foreign banks, the stock market, or lawful businesses to either conceal the money or make it appear legitimately earned. And that, my friends, is money laundering.
The initiative to work against illegal money laundering is called Anti-Money Laundering(AML).
Got it. How does this affect me though?

We are sure it doesn’t need to be stated, that criminal activity is wrong and it’s detrimental to our communities.
You may think that money laundering doesn’t affect you, as much as personally-targeted financial crimes, like credit card fraud or identity theft.
However, you can suffer from money laundering in more indirect, but very impactful ways. Money laundering can take a huge hit against your local economy, financial institutions and legal system, and it financially supports organized crime in your community and on a global scale.
That said, there is a worldwide initiative to prevent money laundering and uphold financial integrity.
How is money laundering being prevented?

The Organisation for Economic Co-operation and Development (OECD) is an international group dedicated to improving global social policies. The OECD formed the Financial Action Task Force (FATF) in 1989, with the goal of investigating global money laundering and coming up with preventative measure to guard against it.
Consequently, all 36 participating countries have systems in place to combat money laundering.
MidFunder is operated according to the legislations of Switzerland. We are monitored closely by both the Swiss Financial Market Supervisory Authority (FINMA) and our own self-regulatory organization (SRO).
However, we will need to plan our future developments according to the regulations of other countries, to avoid hefty fines and even closure of our business. Beyond financial repercussions, however, we value integrity and honest business, which is why it’s imperative to us, that we follow the letter of the law internationally and continue as global AML leaders.
What are the stats on money laundering?

Here are some of the facts concerning money laundering worldwide:
• A conservative estimate of $150 billion in illicit profits is laundered annually. A large portion of this money gets funneled unknowingly into financial institutions.
• Criminal organizations have started joining forces, to increase their profits and broaden their impact.
• There are currently around 40 million modern-day slaves across the world, forced into labour or unwanted marriages. Money laundering funds is a result of a far wider variety of heinous crimes.
Seemingly disparate crimes are actually inextricably linked. Keep that in mind, if you feel tempted to buy a fake purse the next time you’re on holiday. It may be hard to imagine, but fake merchandise can actually fund drug trade, child labour, terrorist groups, and human trafficking.
Awesome! So how is MidFunder committed to Anti-Money Laundering?

‍️
We are dedicated to abiding by the laws and standards created by local and international regulating bodies. We do this by:

Obtaining ID and necessary documents from all of our clients, when they sign up with us. Then we authenticate that personal data, which is the reason we ask for a photo of your ID.

Asking for clarification so that we know what you’ll be doing with your account.

Requesting additional documents, if you hit your account limit or conduct particular account activities. so that we know the origin of your funds. This is known as a ‘Source of Funds’ check.

Still here?
We also use sophisticated software, that will flag suspicious or abnormal activity. In this way, we have a better chance of discovering fraud, money laundering, and other illegal pursuits. Trust us, the software knows how to do its job.